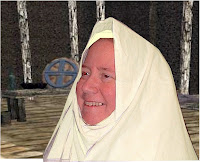 Gentle reader, with your leave I shall correct an omission I had made in telling you of the guests at my merry Yule feast. Oftimes now I have mention those twain who harvest the fruit of the sea that fills my hungry travelers’ trenchers and bowls. Yet did I fail to tell you the name of that harvester of the forest and fields, my good friend Osmund the Hunter. For though the fish be aplenty most times of the year if Alduin and Swedferd and their fellows choose to seek them far and near, ‘tis a merit to Osmund who brings wild game and birds that fill the nostrils with a rich treasure and the mouth a hearty supper e’en when game is scarce.

Nor could he be more unlike to the merry fishermen could Osmund! He is a quiet man, not at all glum but passing solitary. His profession suits his temperament. Most happy is he to spend his hours alone amid the beasts of the woodland and also the heath and fens nearby. He is not loathe to spend time with his fellow man, but oft seeks his own counsel. When a company is gathered, as any evening at my tavern, you may yet find Osmund within or if the days are fair and the game is abroad, you shall not, but shall you see him soon with a brace of partridge and a smile.

Nor does this good man bring only game meant for the spit or firepit. Though most of the comes with fowl such as pigeons, cranes, grouse, or wild hens, or small game like squirrels, wild pigs and hare, he may as well have in hand a fox, weasel or badger for the fur and upon a time he has brought home the deep warm pelt of a wolf.

Upon a cold evening not long ago good Osmund sat to share a bowl of ale with me at the table nearest our hearth. Few others wished to brave the chill so stayed away to warm their toes at their own coals, so Osmund and I shared the hall with yet but two or three travelers who hunched o’er their bowls of potage happy to have found refuge for that one night at least. Osmund had brought me hares and quail , and they were now upon the table in the kitchen awaiting my maids’ attentions in the morning and my guests’ bellies upon the morrow’s supper.

Osmund, who speaks but little on most occasions, did recall to me the time, many years ago, when our lord King was at war in Affynshire and all the fyrd* was called up to fight at his brave side. Osmund himself, a stout bowman as it is how he makes his living, was required to go, and proud to serve his King as well. But well do I remember long months of little game upon the trestle as Osmund’s gift with the bow was to hunt the enemy. Full sore was he to have to kill another man, for ‘tis a waste, he says, when his bow could be a-bringing hearty victuals to his neighbours’ pots and not just a soul to God’s own hall. But farm and smithy and shop and more likewise emptied of its young men and many came not again.

I did ask my friend about the game that the King and his housecarls and e’en our lady Queen will hunt and the feasts that then may take place in the royal hall hard by our town. He smiles his admiration for the great beasts our King himself hath provided to his own table, deer, boar and others. The lady Queen herself is known for her skill with a bow, ahorse and running, which makes likewise the King to smile and that with pride at his lady’s prowess. Dear Osmund ventured to wonder if the King shall take to the new fashion of using falcons and hawks to hunt for smaller game. I inquired if he should also wish to partake of falconry, but said he it is a sport only for the noble and wealthy. Then he leaned to me and in the softest voice did confide that he should fear that the birds would take too much game and thus deprive my firepit of a roasting wild goose and his scrip of jingling silver.

I know that Osmund is not wed, and ne’er has been, and think I that he loves his liberty too warmly to share it. His cottage lies outside the stockade walls and one may see him not for many days at a time. Upon a time I have seen him walking with his bow upon his back and a smile on his face, whistling a merry tune as he takes that fondest step across the verge of the path and onto paths the rest of us may only guess at.

Still when this good man and I may sit upon an evening and drink together Osmund is warm and cheering company, with his quiet wisdom and his patient heart. We are of an age and if I thought he would take my offer I should try to take him to my bed, for he is the sort of comely that is born of long hours in the woods and fields and long years observing all that passes round. But I comfort me with the small voice that does tell me that ‘twould change our companionable moments and I should lose the comfortable friend and never gain a lover. I shall content me with the soft fur of a wolf he did bring as a gift to me on a day long gone past and which lies across my bed, and across my body when the night is cold.

So shall I let mine eye drift to the kitchen door anon and wait to see the tall and bashful fellow stoop within, his sack full to bursting with his hunt’s bounty. Mayhap this time will be grouse, or mayhap smaller birds aplenty. A wild goat will be a boon indeed, but happy we to have the smaller creatures that Osmund’s arrow may find.. Though in sooth game is not so ready to hand as are the creatures of the sea, when Osmund doth take his bow and smile to the woods, what game there is shall straight way find its path into my cooking pot.

* Fyrd: the levy of common men, farmers, fishermen, hunters, laborers, shopkeepers, and so forth, called up by the lord or reeve to serve in the King’s army. See the article on Regia Anglorum at http://www.regia.org/fyrd1.htm .

** Leofwen Taverner of Eoforwic is Nan Hawthorne, author of An Involuntary king: A Tale of Anglo Saxon England. This story was originally published on the Blue Lady Tavern blog, soon to be rereleased as "Alehouse Tales". See http:..www.nanhawthorne.com for more information.
Posted by Kit moss at 5:40 PM