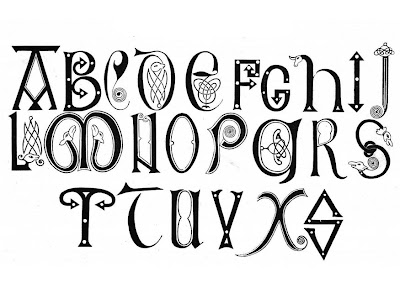 Shared via AddThis
Posted by Kit moss at 9:54 PM 3 comments:

Elizabeth Chadwick's blog, Living The History  has an absolutely fascinating entry today.  It's all about well, sex, medieval-style.  Which apparently wasn't much different from the modern kind.  Except that there were monks and priests imposing penances for certain kinds.  Like, for example, kissing your husband or wife on a Sunday.  Or "doing it" on the "wrong" day of the week.  Maybe this was a crude attempt at birth control?  Even if the monks in question probably would have been horrified if anyone had pointed that out.

Still, it doesn't seem to have stopped anybody from having their fun, so to speak, because there seems to have been, as Ms. Chadwick points out, an awfully long list of , um, proscribed activities.  Om the other hand, medieval people seem to have been realistic about certain aspects of this.  You could get an annulment if your husband was impotent.  Ms. Chadwick describes one example where some matrons in England tried to "stimulate" some poor fellow, and he wasn't "stimulated", so they declared him a "fraud".  In other words, marriages were primarily for the  procreation of children, and if one of the other of the couple couldn't "produce", well, that was  Just Too Bad.  Usually, though, women were blamed for this.  It was almost never the man's fault.

But people could entertain themselves with "innuendo" in various ways.  The Chadwick blog also has a very interesting picture of an object, which apparently is based on an important part of the male anatomy.  I've seen similar "objects", disguised as cup handles(my daughter accidentally wandered into a store selling such items an as I wandered in after her, I saw these things.  I yanked her back out pretty fast, not because I'm especially "prudish" about such things, but because this stuff is pretty much over the head of an 8 year old).

Finally, medievals, at least in England, in Anglo-Saxon times, were ingenious about inventing ways of entertaining themselves.  Again, Ms. Chadwick gives an example. It's a riddle.  I happen to be familiar with this particular one; it sounds somewhat "pornographic" to the modern eye and ear, but its answer is actually quite innocent.  I'm sure people must have been highly entertained, whiling away their time guessing these riddles.  They had to be, I suppose. because they didn't have TV, movies, the Internet, etc.  Few people could afford books, let alone  read them.  And they invented jokes and riddles that even today, produce smiles!

Me timbers are too stout to shiver! 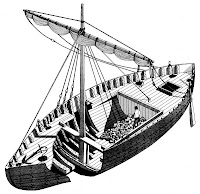 Since the decision came about to re-edit the first book of the Macsen’s Treasure series, INTO THE PATH OF GODS, I knew a number of historical points needed to be corrected as well as some other logistical issues. One scene that originally took place along a roadside needed to be moved to a more logical location and will now take place on a trading ship. While the updated scene provides the same storyline and character pathways, it will now make more sense and have more impact. As result I needed to check into a little seafaring history of fifth century Britain.

Unfortunately, maritime archaeological finds for that timeframe is scant. However, we do have the remains of two Romano-British ships discovered in the River Thames, one of which was located at Blackfriars beneath 20 feet of water at high tide. It was excavated in 1962-63. This ship is thought to have been built by native British shipwrights in the second century AD, putting it quite earlier than the period of Arthur, but it is also thought to be of the type already in use in Britain since before the Roman invasion. It is probably indicative of the type of ship still in use in the latter half of the fifth century.

Based on this conjecture, I have patterned the vessel in the book after the Blackfriars ship. The following list encompasses the basic facts that the archaeologists recorded.

· Built carvel style
· Hull entirely of oak
· Hull planking had massive floor timbers 12” wide, 8-1/2” thick
· Strakes were 2” thick and caulked with hazel twigs
· Strakes attached to floor timbers with special 29” nails
· Nails were driven through the strakes and floor timbers
· Ends of the nails’ shanks hammered over to embed the tip into the timbers
· No keel; two central planks instead, 2’2” wide, 3” thick
· Beam of about 22’
· Overall length about 55’
· Depth more than 7’ amidships
· Bottom nearly flat, enabling ship to rest evenly at low tide
· Chine angle 30-35°
· Oak planks covered cargo area in central part of ship
· Mast-step was a rectangular socket about a third of ship’s length from the bow
· Bronze Roman coin found in the step as a votive offering
· Assumed only one square sail on one mast
· Must have been a deck, due to depth of ship
· May have been a cabin on deck in the stern
· Cargo had been building stone when ship sank

Some definitions:
Carvel-built: the planks are all flush from keel to gunwale. Planks are smooth-seamed.
Chine: the angle where the side and bottom of a hull join
Gunwale (pronounced GUN-nel): the upper edge of a ship’s side
Stem: a timber forming the front extremity of the ship
Strake: a row of planking on the side or bottom of a ship from stem to stern on the outside of the hull.

The information here comes from George F. Bass’s book A History of Seafaring, published back in 1972. I was afraid his information would be out of date, but I’ve also checked out two more recent books and the Blackfriar’s boat is still considered the definitive archaeological find for the timeframe in question. While the ship in the re-edited scene is not terribly significant, I’m always appreciative of good information. Knowledge is a good thing!
Posted by Kathleen Guler at 3:36 PM 3 comments: