What Was It Like to Live in the Early Middle Ages? 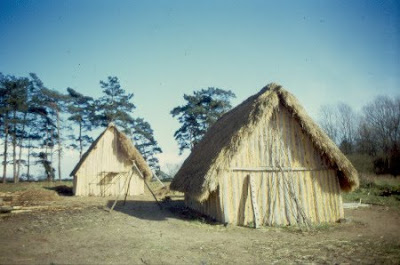 1. You spend a lot of time outdoors because indoors there was very little light even at the best of times.

3. If something hurts, it keeps hurting until it heals. The efficacy of herbal medicine that you read of in historical novels is highly optimistic.

4. You break a tooth on the bits of millstone in the bread you eat.

5. You do not change your clothes very often at all.

6. You never go more than several miles from where you were born.

7. You do not hear about important events for weeks, months or even years.

8. If you do travel, you are out in the weather whether walking or on horse, If it rains you get soaked. The roads are narrow and muddy much of the time.

9. If your leave your loved ones or they leave you to live even a matter of leagues away, you hear very little if anything from or about them ever.

10. The food you eat is based on what is in season at the time or what could be preserved or stored. There is little variety.

11. You breathe in smoke from your fire day and night.

12. You probably have to deal with lice and fleas.

13. If you become pregnant you know you have a strong chance of dying in childbirth.

14. Just about everything you have you or someone in your family made by hand.

The point of this list is not to disturb anyone's illusions, but simply to acknowledge differences that are easy to forget. It is likewise easy to forget that these conditions still exist in the world.

I get a lot of news feeds, and one  of them is from, surprise, surprise, a site called Medieval News.  A day or two ago, they had  a piece from a cooking site called CookIt!, which is based in England's east coast(apparently).  There are both modern recipes and "historical" ones, and since this is "Early Medieval England", I think some readers might be interested in looking at the recipes from Anglo-Saxon times.  I looked at them, and what I can tell you  is this:  these recipes are not all that different from what a lot of people who cook "organically" often eat:  lots of beans and vegetables and  what we would call soups and stews today.  Very nourishing, using whatever they had available, with a little of whatever flavorings they could put into it, and were available, very "seasonal"(there's a reason why February was called Kale Month in Anglo-Saxon times!  Anyway, some of the recipes, which are aimed at what Americans would call "middle school" kids, are not all that hard to make.  There's one for baked apples which really looks delicious!  And there are some others that are worth trying, too. Also, the "Medieval" section looks interesting, though some of the recipes there look a bit complex, or else they're things people probably wouldn't want to eat very often(and probably didn't eat very often then, either).  But it's fun, and the directions are easy to follow.